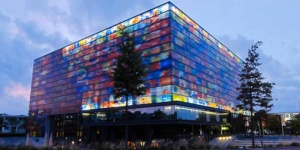 Hilversum is a medium-sized town in the Gooi area of North-Holland in the Netherlands. Once called the Garden of Amsterdam, most travellers still come over to cycle and hike through the surrounding forests and heath. The city is also known for its modern architecture, with Dudok’s Hilversum Town Hall (Raadhuis Hilversum) being the most significant design. For Dutch people, Hilversum became synonymous with the Dutch media industry since one of the first and tallest radio aerials was built here in the 1920s to broadcast worldwide on shortwave
Best means of transport:

On foot and bike

As nearly all stores, restaurants and bars are located in the centre, walking is a good way to get around Hilversum. From the main railway station, it’s a short walk through the Leeuwenstraat to reach the centre and most of the sights. The streets in the centre are pretty much free of cars and bicycles, except for the Groest on which bicycles and a limited number of cars are allowed.

The outlying forests have pedestrian trails available as well, but the vast distances make them more suitable for biking. Hilversum is probably one of the safest towns to explore by bike, as all the larger roads have designated biking paths, which can be recognised by the reddish-purple colour. Bikers can follow the specific signs with a white background and red letters.

The Institute collects, looks after, and provides access to over 70% of Dutch audio-visual heritage! It’s also a museum, offering an unprecedented amount of (Dutch) sound and screen history to its visitors

+31 35 629 28 26, . This is unquestionably Dudok’s masterpiece. Built in 1928-1931, this building has wide international fame and features in many architecture textbooks. The building has a remarkable shape and feels like a combination of ‘blocks’. It’s built with specifically designed yellow bricks that have a slightly different size than traditional ones. Dudok is also responsible for the interior, the furniture, the decorations and even the font. Every Friday at 1:30PM and Sunday at 1:30PM and 3PM there is a guided tour through the town hall for €7.50. It is in Dutch, but the guide will also tell something in English upon request. It gives you the chance to view some rooms closed to the public, such as the marriage room and the mayor room. You will also visit the Dudok Dependance, a permanent overview of Dudoks life and work. At the end, you will climb the 46 metre tower for a nice view of Hilversum and the surrounding areas. There are special arrangements possible for groups. For bookings, call the listed phone number or ask the staff of Museum Hilversum.edit

Dudok Dependance is a separate part of Hilversum’s famous town hall, located in the basement of the building. Administered by the Museum Hilversum, it is basically a permanent overview of Dudoks life and work. There’s also an exposition on the renovation of the town hall, which took place during 1989-1996. It took 5 years to restore the exterior and the interior to their original state, which almost plunged the municipality of Hilversum into bankruptcy. Keep in mind that it’s only opened on Friday and Sunday from 1 until 4:30PM.

Besides these, you can buy many stuffs from Jumbo, Albertheijnand Lidl supermarkets.